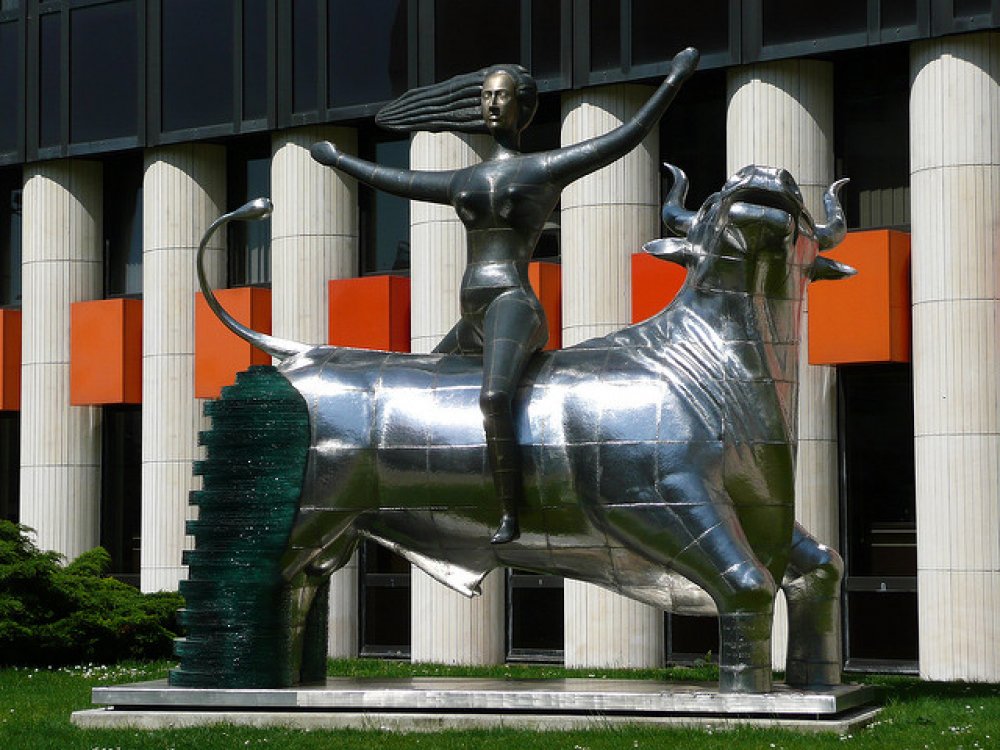 Statue of Europa and the Bull, Winston Churchill Building, Strasbourg.

The D-Day 75th Anniversary celebrations commemorating 6th June 1944, as expected re-applied the myth that European Union evolved after World War 11, in order to bring peace to Europe. The evidence in The Secret History of European Union [2 vols] points to the high probability that two world wars were gearing in order to create European Union. For many arguing that the UK should remain in the EU, the first and foremost claim is that it is a force for peace. The myth however is part of fake history and becomes fake news. A few years ago, the EU was even awarded the 2012 Nobel Peace Prize, honouring the myth and fake history for the ‘Advancement of peace and reconciliation, democracy and human Rights in Europe and being instrumental in transforming most of Europe from a continent of war to a continent of peace.’

President Trump in a speech at the ceremony claimed “They [veterans and the millions that died] battled not for control and domination, but for liberty, democracy and self-rule.” Perhaps it slipped Mr Trump’s notice that whilst Trump was elected, Jean-Claude Juncker, is the unelected President of the European Commission chosen in 2014 for this vital role at the apex of the European Union, despite serious objections by the then Prime Minister of Britain – David Cameron. It certainly was a factor leading to Brexit.

Juncker is an ardent Euro federalist, a secretive Luxembourger whose peculiar relationship with that nation’s security and intelligence services cost him his job as Prime Minister of the Grand Duchy. This underlines the lack of transparency and undemocratic methods which characterise EU policy-making. I have delved very deep into the labyrinth of secret groups and the rule by synarchy, which covers the true history of the EU.

Juncker on the EU’s monetary policy stated: ‘I’m ready to be insulted for being insufficiently democratic…but I am for secret dark debates.’ At the time of the British referendum he stated ‘on the British calls for a referendum on the Lisbon Treaty, of course there will be transfers of sovereignty. But would I be intelligent to draw the attention of public to this fact?’ When some European nations called referendums over what was then termed the EU Constitution or the plan to turn the organisation into a federal state, Juncker stated ‘If it’s Yes, we will say “on we go”, and if it’s a No we will say “We continue.” In short no way out of the labyrinth, with that elusive Minotaur at its centre, which I have chased for 30 years and finally cornered “the Beast.”

Juncker in 2018 managed to put his political adviser, Martin Seimayr – a fully signed up proponent of the federal Pan European State, in charge of the entire workings of the European Commission. The job of Secretary General of the Commission was already occupied, until the man was persuaded to step down in favour of Selmayr. An incandescent European Parliament, instructed an ombudsman, Emily O’Reilly to investigate. Her heavily critical report claiming many acts of maladministration was ignored but Juncker followed his mantra “we continue.”

President Macron at the D-Day memorial service mentioned “…Loyalty to the universal values that the founding fathers defended, when nearly two and a half centuries ago France came to support its independence…” To be more truthfully accurate it was not “France” but the secret groups (Freemasonry) who plundered the coffers of France, executed the monarchy in order to assist the American Revolution, whilst the citizens of France, were being terrorised and murdered in the Reign of Terror, following the French Revolution. Macron seemingly taking a leaf out of Juncker’s book; ‘But would I be intelligent to draw attention of public opinion to this fact?’

The Minotaur has two faces, one male and another male [bull] and female combined – there are two groups in this particular secret history. Unfortunately they both missed the critical unknown secret jigsaw piece at the very beginning [vol. 2 pg. p. 444] – tough!

“In a time of deceit telling the truth is a revolutionary act.”
― George Orwell

Catch me next week!