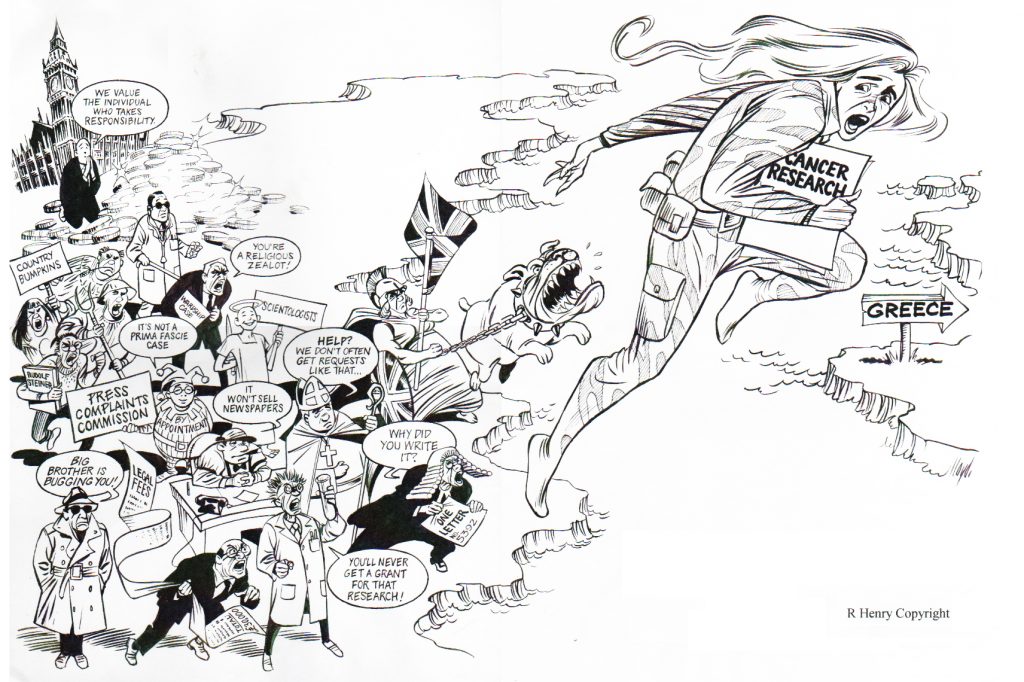 Today any opinion no matter how ill-informed can travel around the planet in an instant. However absurdly it is also a time when free speech is under threat in the very institutions that are supposed to encourage it. The practise of denying people the right to express views that a self-selecting group of social media users, students and academics has decided cannot be tolerated is known as “no platforming”.

The silencing of contrary opinion is not a position of power but of weakness and fear. The nervous expectation that investment in a particular viewpoint e.g. job, career, education, possessions, ego, will all come tumbling down. Governments, corporations and religions suffer the same nervousness. Fear lies behind the demand to suppress religious or political dissent, but lunacy lies behind the silencing of new scientific paradigms. It is well to remember that the datum of the psychotic is ‘I must be right or I die’.

On June 1, 2017, United States President Donald Trump announced that the U.S. would cease all participation in the 2015 Paris Agreement on climate change mitigation. Trump stated that “The Paris accord will undermine (the U.S.) economy,” Following that the US government has deleted thousands of documents which mention climate change. As a point, it illustrates no platforming at government level and further illustrates how financial or vested interests determine free speech. Recently President Trump refused to talk with the British Ambassador Sir Kim Darroch, because he felt offended by his views. As a point it illustrates how power can control free speech – government censorship, in this case the ability of diplomats to communicate to their governments with honest and valuable information. It also illustrates how vested interests control communication lines and constantly confuse them.

No platforming is part of a much wider and deeper form of suppression of free speech, carried out on a daily basis by newspapers, news channels and programming. Media content whether owned and controlled by billionaires, or the so-called ‘independent’ media are constantly suppressing viewpoints ensuring the populous conforms to their agendas and particularly those which protect financial, political and even religious interests. These agendas are further supported by the founding of political interest parties, fake campaigns, social media ads, lobby groups, revolving doors [the old boy network] etc. Their ever watchful eye soon spots any outlier, someone with a viewpoint that threatens their world, their interests, someone who may present a different paradigm.

Rupert Murdoch owns the Times, Sunday Times and Sun; the Barclay brothers own the Telegraph and banking concerns; Lord Rothermere the Daily Mail; the Russian oligarch Evgeny Lebedev owns the Evening Standard. They control the political agenda and influence broadcasting news lists, ensuring they protect their financial interests. Jeremy Corbyn has certainly felt the hounds chasing him. In three quarters of a century there have only been three Labour Prime Ministers [Clement Attlee, Harold Wilson and Tony Blair].

As a Biochemist who worked in both orthodox research and in the alternative field for 30 years, I have witnessed first-hand the tactics used by vested interests to deter opposing alternative viewpoints which might rock the solid gold gravy train of profits. Those tactics are related more fully in The Cancer Files. The pharmaceutical industry, supported by an entrenched medical establishment and successive governments ensures the train rolls on. To stand against this formidable force and self-serving clique inevitably invites a never ending series of attacks from their hounds.

The ritual of British ministers raising human rights issues with Beijing and currently the loss of freedoms in Hong Kong is hypocrisy at its worst. Freedom of speech, judicial independence and education (the curriculum) are at the forefront of protests in Hong Kong. The protestors have accused the courts of being influenced by politics. British ministers tut-tut with an arrogant assumption that British Courts would never violate Article 6 [fair trial with no bias] and yet my letter to the Attorney General Geoffrey Cox [under Mrs May’s government], remains unanswered. Perhaps he is too busy filling out his expenses, or playing “Rumpole” of the Old Bailey in the House of Commons. The Conservative MP Cox  for Torridge in 2016, one of Britain’s highest-paid MPs, reportedly had an expenses claim for a 49p bottle of milk rejected by the Commons authorities, whilst failing to declare £400,000 worth of outside income on time. A barrister told me “They don’t like to grant Article 6 violations, because they have to report them.” There goes my back story and another tactic for silencing free speech –committing and hiding violations, so they can continue to tut-tut at Beijing. Don’t get me wrong I do agree with the protesters.

Although it seems silly to us now, but not so long ago the Earth was considered to be the centre of the Universe, an astronomer named Copernicus ruined his career by challenging this idea of a ‘geocentric solar system’. Even more incredibly nearly sixty years later Galileo [the father of modern science], inventor of the telescope and an advocate of Copernicus’ conviction that the sun is the centre of the solar system, ruined his career too, despite he had evidence for the Copernicus theory with his telescope. Another tactic of vested interests is to make sure your evidence never surfaces and if it does, it is re-written with the new paradigm removed and slanted towards vested interests.

Galileo like your author hit the wall of vested interests, in his case the Catholic Church no platforming his view of heliocentrism and the new paradigm, declaring him a heretic. I have personally been put through the inquisition numerous times in British courts [Cox letter].

The professors who had been writing and teaching about a geocentric universe pretended not to know about the telescope, or refused to look through it. This reminds me of the comment of one top oncologist when I offered to take him through my research on cancer. “If I look at what you are saying, or doing, I might have to question what I am doing and I’m not prepared to do that”. No way was he going to look through the telescope at a new paradigm.

At the time of this conversation, cancer affected one in four, but now it affects one in two i.e. 50% of the population [introduction to Cancer Files]. We are all the victims of vested interests news items which claim a cure is just around the corner. It is also the case that the UK trails behind the world leaders in cancer treatment where patients die earlier than those in other countries.

Kickbacks, fraud and misconduct were identified as rife among American medical researchers by a US congressional committee. The position in the UK is no better. The conflicts of interests of doctors are not reported properly by any NHS hospitals where only 16% of hospitals will say how much and which companies paid their doctors. Overuse of opioids by doctors paid by the companies that make them became a scandal in America. In the UK in 2016 a total of 16,772 doctors were paid a share of £166 million by drugs companies in consultancy fees, travel and other costs including freebie holidays for conferences in exotic places [BMJ]. Doctors are more likely to be positive about treatments they have a financial stake in.

There are few safeguards to ensure research is accurate and unbiased and The Cancer Files covers the shocking case of Professor Mc Ewan. Conflict of interest in courts extends to research, where results often reflect who pays the bills for the research. The petroleum industry funds research to contradict climate change. ‘In this manner money corroded academic values and in order to survive in academia you have to get funding and you then have to publish, in order to do that you don’t rock boats unless you want to commit professional suicide. Thus went my story…’ [The Cancer Files p. 446]. Another tactic is to refuse funding and publication to any research that challenges the old paradigm, in this way vested interest maintains a state of no change, protecting the self-serving clique.

The historical list of alternative cancer researchers and practitioners who have had the hounds of vested interest loosed on them is fully covered in The Cancer Files. The media acting for vested interests periodically run ‘Quack’ stories, in order to stave off any threat to vested interests. Alternative practitioners and researchers such as myself were often highly qualified doctors or scientists. In the case of Linus Pauling he was a two time Nobel Laureate and even he was refused funding five times, when he wanted to conduct a study on vitamin C in cancer. It only took the government 34 years to grudgingly admit that an orange a day is an anti-cancer dietary requirement.

In the 1980s I was promoting and lobbying parliament through my MP as to the importance of nutritional medicine [diet] in treating chronic disease and cancer. It might seem surreal now, but at the time a report of the London Food Commission, a pressure group, cataloged many examples of excessive official secrecy in relation to food. They identified areas in which the government conspired to keep data secret e.g. pesticide safety, the diet of school children, government committees on food additives. The Official Secrets Act was even employed in order to maintain that some of these secrets were vital to national security. They were of course vital to vested interests. The mind set was appalling and still is and yet this was the scene we fought in the 80s [The Cancer Files p. 208-209].

It is ironic that the fight for freedom of speech fought in the 80s is now policed through no platforming by a generation that we sought to inform. It only took 35 years for governments to admit that diet was a factor in cancer and come up with ‘5 a day’. The hypocritical media who fought that, now promote pages to it, at profit of course, whilst bemoaning the junk food/obesity crisis and rise in type 2 diabetes, all of which could have been avoided if they had listened. We now move on to the mental health crisis.

Britain risks missing scientific breakthroughs if student zealots shut down free speech on campuses, the universities minister Jo Johnson warned in 2017. Mr Johnson said students must get used to having beliefs challenged or research would suffer. Really you don’t say! – a case of pot calling kettle black. The establishment and media have blocked alternative methods, scientific breakthrough and new paradigms for decades in favor of vested interests. Cancer is a multi-billion pound/dollar business.

I was told in 1985 by an oncologist I would die, by doing the Gerson Therapy, based on an organic diet of fruit and vegetables [although the mind mechanism covered in The Cancer Files is essential]. It only took 34 years for scientists to find oranges, carrots, cabbage, grapes etc., to be among 110 foods with cancer beating molecules [CBMs] similar to those of licensed drugs, but with no side effects. I had to smile when the research stated ‘the benefits of fruit and vegetables for reducing cancer risk are well known’ – well not in the 80s with no internet and just newspapers promoting vested interests! It seems the campaign was not in vain. Maybe in another 34 years New Scientist magazine will cover the link of mind and body I set out in the mechanism of cancer. No doubt it would be yet another politically correct version with a nod to vested interests and where all traces of the Woman and her Mysteries will have been erased yet again [Heading Towards Omega blog].

‘Those who cannot remember the past are condemned to repeat it’

It is unlikely that the self-serving clique will ever allow the new paradigm to emerge even though it was accepted wisdom from the earliest times.

‘Before you can cure a man’s body you must cure his mind and before that his soul’.

catch me next week!